About the Wageningen Werewolves

The Wageningen Werewolves are a Wageningen based quidditch team, aimed at students from Wageningen University. Sportivity, fun and inclusivity are important to us: we play in the national competition and participate in (inter)national tournaments, but besides playing quidditch we also like to do other fun activities together like drinks, dinners, game nights and team weekends. We are an open and kind group of people and we welcome people of all genders. 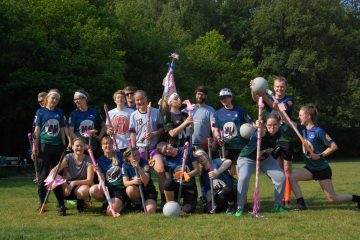 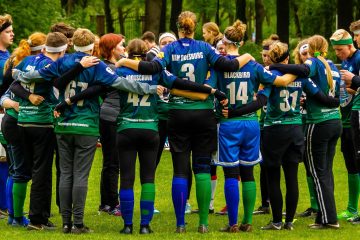 On October 6, 2014 the first ever quidditch event was held in Wageningen: the Quidditch Experience, organised by the team’s founders Chula Bruggeling and Juliane Schillinger in cooperation with SWU Thymos. Afterwards, a group of enthusiasts joined forces and formed a stable group of players that proceeded to practice twice a week. In the following seasons, presence at the AID sports market and introductory practices resulted in new players added to the team.

Since the foundation of the team, the WURwolves have competed in several national and international tournaments. Members of the team were also selected for each appearance of the Dutch national team, the Flying Dutchmen, since the start of the team in 2015.

The season 2017/2018 brought some milestones for the team: on 11 September 2017 the association was officially established and subscribed to the Dutch Chamber of Commerce. The development continued when our association joined SWU Thymos as a Student Sports Association on 20 February 2018.