Quidditch is a mixed gender sport that is best described as a mix of handball, rugby and dodgeball, casually played on brooms. The sport was first played in Vermont, US, in 2005. It has it’s roots in the fictional sport of the Harry Potter series, but since it’s creation it has developed into a fast growing sport with several hundreds to thousands active clubs.

A quidditch team consists of seven players of four different positions. The three chasers try to score points by throwing the quaffle through one of the opposing team’s hoops, this is awarded with 10 points. To prevent the opposing team from scoring, each team has a keeper. The two beaters try to hit players on the opposing team with bludgers (dodgeballs) in order to temporarily knock them out of the game. The seventh player, the seeker, tries to catch the snitch: a neutral player tasked with the defense of their snitch tail that is attached to the back of their shorts. The catching player’s team is awarded 30 points and the game ends. 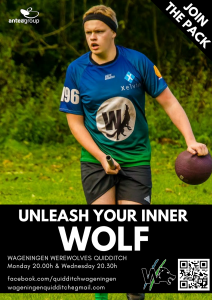 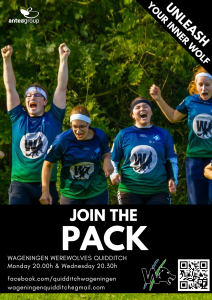 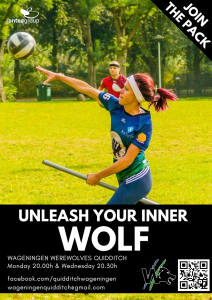 Want to try quidditch yourself? The Wageningen Werewolves train twice a week. On monday from 20.30-22.00 and on wednesday from 20.00-22.00, both on field D at the Bongerd. Please send us a message in advance if you’d like to join.

Do you live elswhere in The Netherlands? Click here for an overview of Dutch teams.